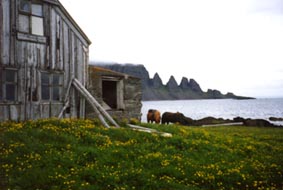 Kalfagerdi, a farm, home of the 18th century Kalfa­gerdi brothers, guilty of... more

WITCHCRAFT and SCORCERY in North Iceland

Modrufell is a farm in Hrafnagilshreppur county in district... more

Munkathvera is a farm, a church site and a former manor in the Laugaland... more

Farm Geldingaholt is in the Seyla County in the Skagafjordur District It was... more

Flugumyri is a farm and a church site in the Blonduhlid County The present... more

The old estate Illugastadir on the Vatnsnes Peninsula is a historic place ... more

The farm Hof is situated in the eastern part of the Vatnsdalur Valley ... more

This farm is situated on Lake Hofdavatn in the Hofdastond County, District... more

Bjarg is a farm just east of River Midfjardara, rather high up in the... more

Lake Vikingavatn has an area of 2,4 km² It is rather shallow and only 4 m... more

Lake Slettuhlidarvatn has an area of 0,76 It is shallow and situated 14 m above... more

The long abandoned farm Haugsnes in Blonduhlid is a historical site on the... more

About Malmey Malmey is the larger of the two islands of the Skagafjord Bay It... more

About Hrafnagil Hrafnagil has been an estate since ancient times It was a... more