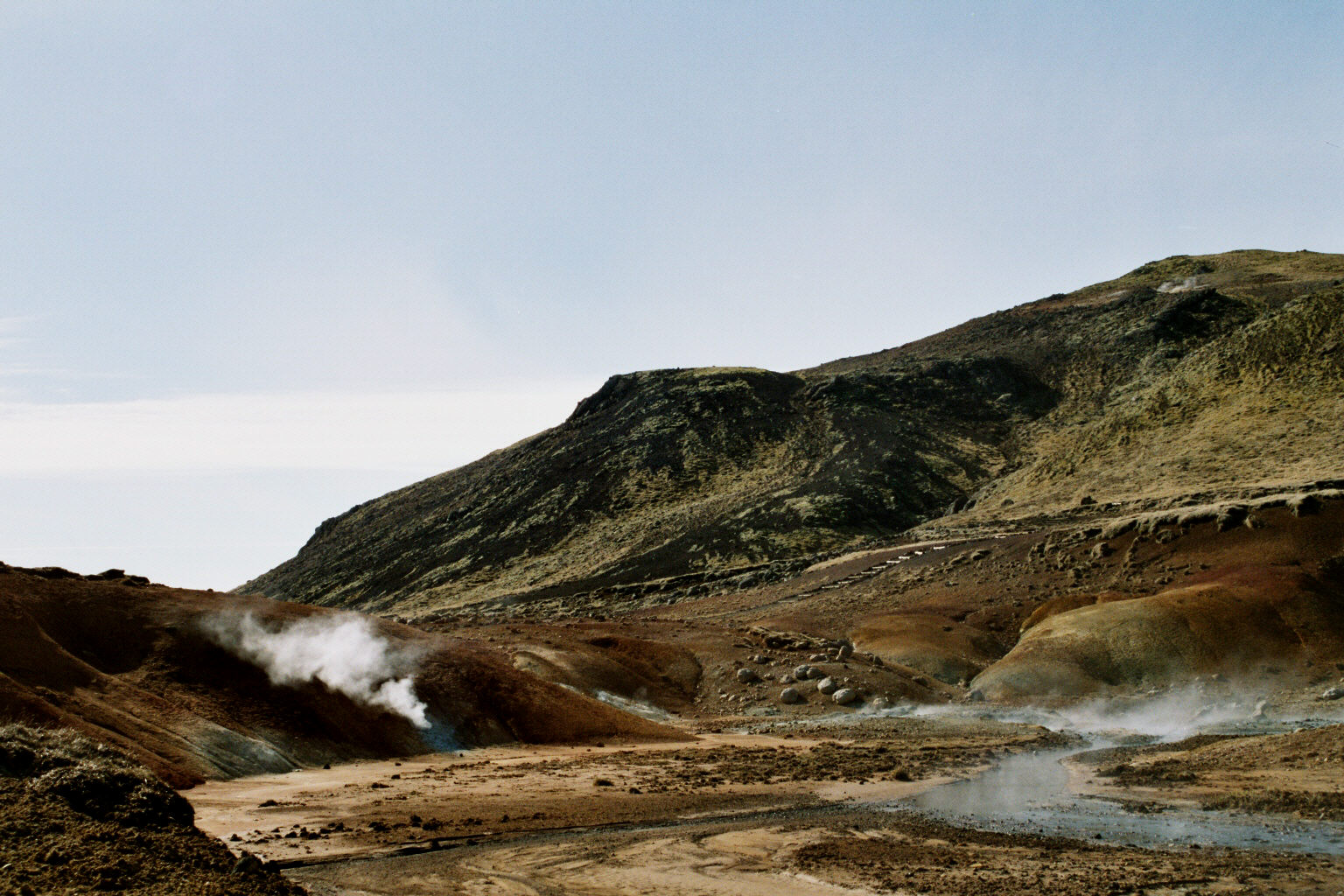 About Volcanism in Iceland

The islands of the Atlantic Ocean created by the volcanism of the Mid Atlantic Ridge are The Azores, Bermuda, Madeira, The Canary Islands, Ascension, St. Helena, Tristan da Cunha, and others. The divergence of the ridge started in the north about 150 million years ago and 90 million years ago in the south. Iceland is the largest island on the ridge because of the additional volcanism caused by the hot spot under the country, which moves slowly towards the northwest across it. These unique circumstances on the ridge probably are the reason for the country’s existence, because the tectonic movement of the plates and the related volcanism would not have sufficed. The country probably would have looked very differently if the hot spot were the sole reason for its creation, probably something similar to Hawaii.

The plate tectonics move the plates apart, towards east and west, and both the North American- and Eurasian systems move to the northwest across the hot spot. It is possible to trace the tracks of such hot spots because the plates move across them like steel plates across a fixed blowtorch flame. On top of the hot spot is a 20-100% molten layer at the depth of 5-20 km, which supplies more than sufficient material for eruptions. This hot spot causes eruptions within the southern volcanic zone including volcanic systems such as Mt Hekla, the Westman Islands, Katla, Mt. Eyjafjallajokull, Mts Tindfjoll, the Laki Area, the Fishing Lake Area, and the western sub-glacial part of the Vatnajokull area. This volcanic zone has gradually moved to the southeast from the present Graben, or the continuation of the Mid Alantic Ridge across the country.

The lateral rift system (flank zones) across the Snaefell Peninsula and the Huna Bay ceased being active about seven million years ago. About 60 million years ago, when it was active, it was situated near the present Faroe Islands and Eastern Greenland where it left basaltic regions and submarine ridges in both directions. The present centre of the hot spot lies under the Trolladyngja shield volcano, where it reaches depths of 275-375 km and probably stretches underneath the mainstay of the Vatnajokull and Hofsjokull regions. The largest volcano and caldera of the country are probably contained under the ice cap of the Hofsjokull glacier.

Approximately 10% of the structure of the country consist of rhyolite, dasite and other acid rock types. The most common type of basaltic rock is thoelite, which is divided into many subtypes. The Ice Age ended about 9000 years ago. The 3 million years long Ice Age was divided into 30 glaciation epochs of almost 100.000 years, and about 10.000 years long warmer epochs between them.

The age of the basaltic strata from west to east is 16 – 10 million years. Eight central volcano systems are recognizable by light coloured rock types (gabbro) and high temperature systems. The structure of the island Hrappsey on the Breidafjordur Bay is anorthosite, the light coloured type of rock on the moon (the other type is norite).

Geldingadala eruption number two On March 19, 2021, after a long series of... more

Volcano in Reykjanes Beginning On March 19th, 2021, after weeks of multiple... more

The slag crater Kerid is the northernmost one of the crater row called... more

The total area of this small glacier is about 19 km² It is located just north... more

The events that have taken place in the Krafla caldera and on the Krafla... more

According to the continental drift theory, the Eurasian and North American... more

The processes by which molten rock material, or magma, rises from the interior... more

Mt Kerling is the highest mountain near inhabited areas in the northern part of... more

Kverkfjoll is a mountain massif underneath and on the northern edge of the... more

Volcanic activity on the peninsula still exists in this Flank Zone extending... more

The Westman Islands, "The Pearls in The Ocean", is an archipelago of 15 islands... more

This lava field and its two crater rows were created by fissure eruptions One... more

Grimsvotn, under the centre of the Vatnajokull Ice Cap, is a large central... more

The Dyngjuhals is a wide ridge east of Lakes Gaesavotn It is about 20 km wide... more

The central volcano Katla is hidden under the southeastern part of the ice cap... more

The 25 km long crater row called Lakagigar was created during a relatively... more

The glacier Torfajokull peaks at 1,190 m above sea level and its total area is... more

Mt Bardarbunga is the second highest elevation of the country, just below 2000... more

Mt Trolladyngja (4,815 feet) is a vast shield volcano at the northern end of... more

The Odadahraun lava desert This is the vastest lava area of the country The... more

Mt Tungnafell (1,392 m) is a convex and steep mountain in the northern slopes... more

Oraefajokull is the highest mountain of the country, 2,110 m, and stretches to... more

This low mountain is one of the northern outposts of the Heimaey Island It... more

Mt Hekla The most "renowned or infamous" volcano of Iceland, Hekla, is... more