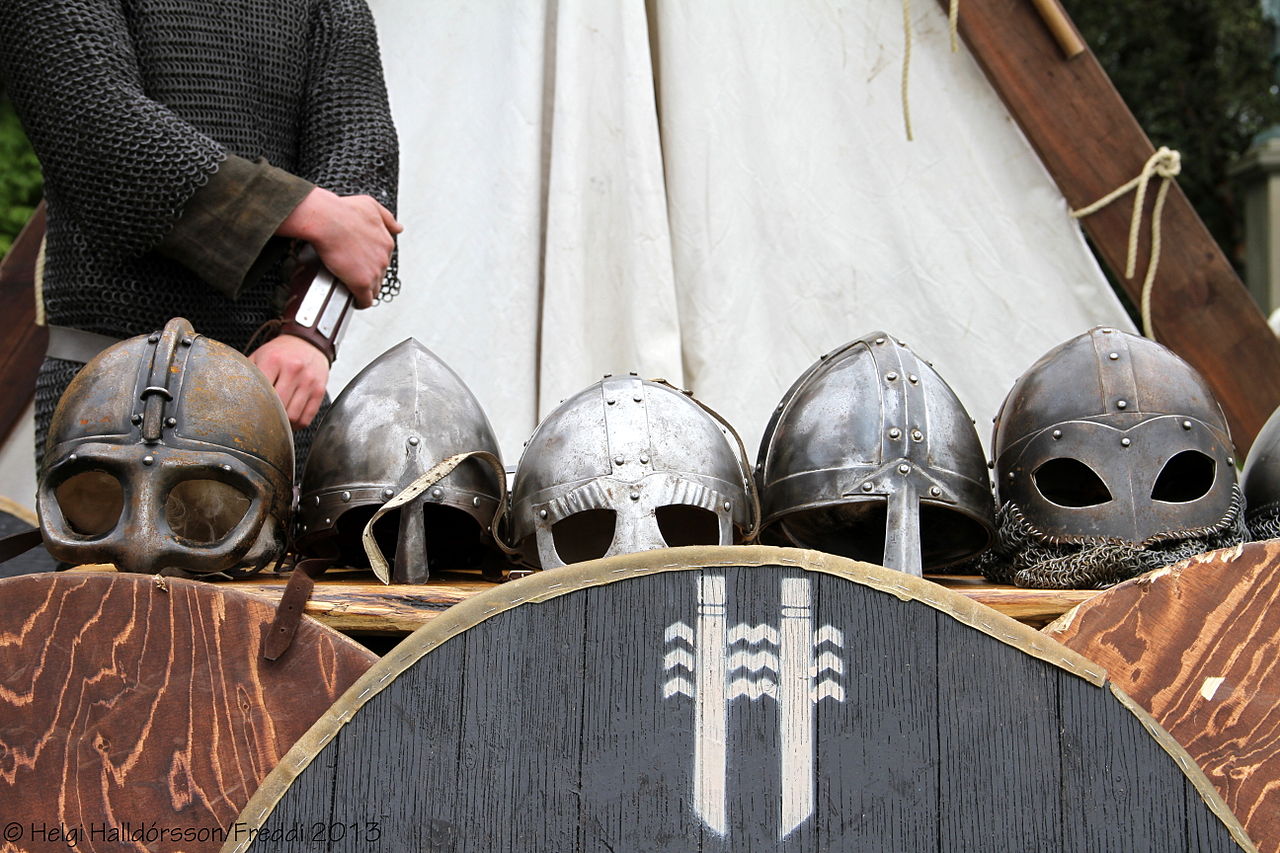 The word Viking is a collective designation of Nordic peoples, Danes, Swedes, Norwegians and Icelanders, who ranged abroad during a period of dynamic Scandinavian expansion in the Middle Ages, from about AD 800 to 1100. Called the Viking Age, the period has long been popularly associated with unbridled piracy, when freebooters came swarming out of the northlands in their predatory long ships to burn and pillage their way across civilized Europe. This, however, is now recognized as a gross simplification. Modern scholarship emphasizes the achievements of the Viking Age in terms of Scandinavian art and craftsmanship, marine technology, exploration, and the development of commerce, the Vikings as traders, not raiders.

The derivation of the word “Viking” is disputed. It may be from Old Norse vik (a bay or creek) or Old English wic (a fortified trade settlement). Not every Scandinavian, however, was a professional warrior or a Viking, and not every Viking was a pirate. The motive causes of Viking Age expansion are complex. Land shortage in Scandinavia, improved iron production, and the need for new markets probably all played a part.

The first recorded Viking raid was a sea borne assault (793) by Norwegian marauders on the holy island of Lindisfarne, just off the northeastern coast of England. Growing evidence indicates, however, that considerable overseas Viking migration, west across the North Sea and east across the Baltic, occurred long before that. Swedish entrepreneurs penetrated the hinterland of Russia, pioneering new trade routes down the Volga and the Dnepr, founding city-states such as Kiev and Novgorod, and opening the way to Constantinople and the exotic markets of Arabia and the Far East. In Constantinople, Vikings formed the elite bodyguard of the Byzantine emperors, the feared and famous Varangian Guard. Danish warriors hammered at the cities of the crumbling Carolingian Empire, Hamburg, Dorestad, Rouen, Paris, Nantes, Bordeaux, until one of the armies in 911 accepted by treaty huge tracts of land in northern France (now known as Normandy, “Land of the Northmen”) and settled there.

Briefly, under King Canute (Knut) II in the 11th century, a Scandinavian empire of the North Sea was established, comprising England, Denmark, and Norway. Norwegian adventurers joined Danish Vikings in subjugating much of northern England (the Danelaw) before settling there as farmers and traders and developing great mercantile cities such as York, while gradually extending their settlement into unconquered northern areas such as Cumbria. They also took over the Northern Isles of Scotland (Shetland and the Orkneys), the Hebrides, and much of mainland Scotland as well. In Ireland they played a lusty part in the internecine squabbles of rival Irish clans, and they founded Ireland’s first trading towns: Dublin, Waterford, Wexford, Wicklow, and Limerick. Viking exploration brought the discovery and settlement of uninhabited lands in the Atlantic—first the Faroes, then Iceland, then Greenland. From Greenland the Vikings launched ambitious expeditions to settle on the eastern seaboard of North America (Vinland), but these attempts to colonize the New World 500 years before Columbus were soon abandoned in the face of hostility from the indigenous peoples. Stories of the abortive American venture are recorded in the medieval Icelandic sagas; but little authentic evidence of the Viking presence has been found, apart from substantial traces of a Viking Age settlement at L’Anse-aux-Meadows, in northern Newfoundland. All other Viking “finds”, such as the Kensington Stone, have been exposed as forgeries or hoaxes, or merely wishful thinking.

The impact of the Vikings was less enduring than might have been expected. In general, they had a great capacity for being assimilated into local populations. In some areas of Britain, especially in Cumbria and other locations where settlements were established in previously unpopulated land, concentrations of Norse and Danish place names are the most notable residue of their presence. A century and a half after settling in Normandy, however, their Franco-Viking descendants were strong enough to conquer England (1066) and Sicily (1060-1090). The settlers brought to the British Isles energetic Viking art forms, new farming techniques, mercantile acumen, and a vigorous language; Scandinavian traces are still apparent in the dialects of Scotland and northern England. They introduced new forms of administration and justice, such as the jury system; even the word “law” is from an Old Norse word. Perhaps the most enduring legacy of the Viking Age is to be found in Iceland, which produced the great medieval literature of the sagas.

In their time, the Vikings had criss-crossed half the world in their open boats and vastly extended its horizons. Having achieved that, however, they had neither the manpower nor the staying power, neither the reserves of wealth nor the political experience, neither the cohesion at home nor the confidence abroad to master effectively the older, richer, more stable states they tried to overrun. Their dynamism was gradually exhausted, and even their swift, magnificent ships were superseded—replaced by much larger, more prosaic vessels better suited to bulk cargo carrying.