Those churches belong to the Arnes benefice in the Hunavatn deanery.

Arnes is a farm, a church site and former parsonage on Cove Trekyllisvik. Pastor Ljotur Refsson is the first priest referred to in old sources in the year 1237, which was a part of the most violent period Iceland has experienced during its history. The parish is one of the largest in the country, but nowadays it is, to say the least, very sparsely populated. For a long time the parish has been served by the Reverends of Holmavik.

The old church was restored 1990-92 and was originally consecrated in 1850. It is the oldest house still standing in the 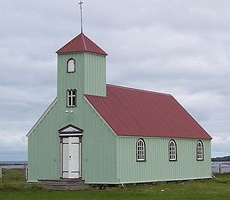 Strandir District. The altarpiece was painted by Carl Fries (1859. The chandelier and the baptismal bowl are ancient and the chalice dates back to 1786. The new church was consecrated in 1980.

WHAT TO SEE?
Nearby Arnes Churches

WHAT TO DO?
Nearby Arnes Churches

WHERE TO STAY?
Nearby Arnes Churches