The northernmost part of the Westfjords is called Hornstrandir. The part east of the sheer, cliffs of Mt. Hornbjarg are called East-Hornstrandir and

consequently the part west of the cliffs West-Hornstrandir.

This area was inhabited until the beginning of the 20th century and the people there were renowned for their particular traditions and habits. Communications were, to say the least, very difficult, especially during winter. The settlements and farms have all been abandoned, and nowadays an increasing number of travellers visits the area to enjoy the solitude, the magnificent landscapes and spend a few days hiking. The area is accessible by boats from Isafiord and the northernmost settlements of the Strandir District. The area along with the cove Adalvik and the bay Jokulfjords were declared a nature reserve in 1975. 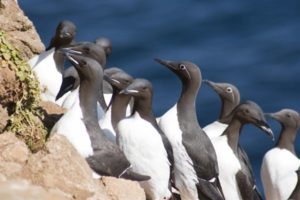 This sheer cliff is one of the greatest seafowl colonies of the world. Its highest peaks reach 534 m above sea level. In earlier times, the cliff was called The Western Horn, but this name was carried over to the opposite corner of the country. On the cove, Hornvik was a fishermen’s hamlet during the earlier centuries and the farm Horn was considered an appendage because of driftwood, the seafowl catch, and the egg picking. This spot of the country, like the most of the rest of it, is tightly connected with the Sagas.

WHAT TO SEE?
Nearby Hornstrandir

WHAT TO DO?
Nearby Hornstrandir

WHERE TO STAY?
Nearby Hornstrandir