The avant-garde exhibition in The French Museum in Faskruðsfjordur is the newest of Fjardabyggds museums and collections. This museum is 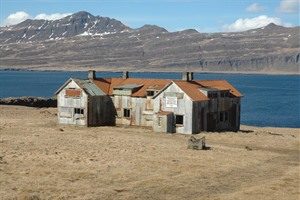 located in two stately buildings, the Doctor’s House and the French Hospital as they are called, built by the French fishermen around 1900. However, the main attraction of the exhibition is situated in a tunnel that connects the two buildings. The entrance to the museum is from the hotel reception area in the Doctor’s House.

In the museum, the interesting history and legacy of the French sailors in Iceland is shown by means of the latest multimedia technology.

The French sailors maintained a station at Faskrudsfjordur from the mid-19thcentury till the First World War, with the number of French sailing ships off Iceland peaking at between 200 and 300. However, the history of French cod fishing off Iceland goes back even further, all the way to the 17th century.

During this long history, many ships never made it back to their home country. It is estimated that up to 400 of them were lost around Iceland, along with 4,000-5,000 seamen. Down by the French graveyard, a monument has been erected in honour of these heroes of the sea who were subjected to hard work, dampness and cold, not to mention accidents.

Their fishing operations were highly important for villages on the northern French coast; for example, in Dunkerque in the 1860s, approximately 6,000 people were employed in relation to fishing off Iceland. These operations were also significant for other villages, such as Paimpol and Gravelines.

The renovation of the French heritage buildings, one of the largest historical restoration outside the capitol area, was finished in the summer of 2014. The five French buildings play a substantial role in local culture and society in Fáskrúðsfjörður. The French Hospital, for example, now serves as a hotel with the restaurant l’Abri on the ground floor. The Chapel is the only building that still maintains its original role and is open for guests of the museum.

WHAT TO SEE?
Nearby FRENCH SAILORS IN ICELAND, Faskrudsfjordur

WHAT TO DO?
Nearby FRENCH SAILORS IN ICELAND, Faskrudsfjordur

WHERE TO STAY?
Nearby FRENCH SAILORS IN ICELAND, Faskrudsfjordur