Nearest towns or place of interest from Reydarfjordur:

The village Budareyri is on the end of the bay Reyðarfjordur. It has a natural harbour. Fishing and fish processing and the aluminium production are the main bases of livelihood.

During World War II, the British occupied the village and planted a large garrison there. This part of the country’s history is depicted in the local World War II Museum.

Just outside the village is a pond, The Duck Pond, where people can buy fishing permits to catch salmon, which is released there for the purpose. The camping grounds are on the pond, but a hotel, a guesthouse, a youth hostel and restaurants are in the village itself.

During the first decade of the 21st century, a Aluminium smelter with the capasity of 290.000 tons was 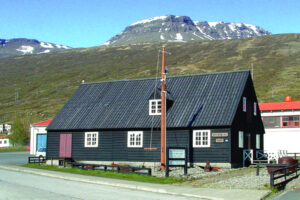 constructed for the international concern Alcoa on the norhtern side of the bay. To realize
this endeavour, the largest hydroelectric power plant of the country was constructed in the eastern interior. From the top of Mt. Graenafell the view is breathtaking on a fine day. If you are travelling north to town Egilsstadir, you should take a look at the current road and weather conditions on moorland Fagridalur, and Mt Pass Oddskard, if you are heading for town Neskaupstadur.

WHAT TO SEE?
in Reydarfjordur

WHAT TO DO?
Nearby Reydarfjordur

WHERE TO STAY?
Nearby Reydarfjordur