Laugarvatnsvellir is a large grassy area, a former lake bottom, 5-6 km west of Lake Laugarvatn on the 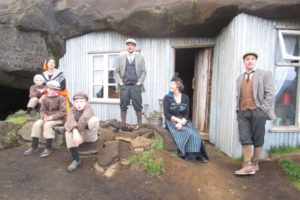 road to The Parliamentary Plains. This is an ancient route and a place where the ancestors rested or spent the night en route. In the lower slopes above the flatlands are caves, which were occupied early in the 20th century.

The married couple, who lived there temporarily, had a child during the stay and the father had to step in as a midwife with good results. They left the caves in 1922. The caves also served as shelter for sheep and shepherds during the centuries and some believed they were haunted.

During cold summers when the haymaking in the lowlands did not suffice, more hay had to be provided from Laugarvatnsvellir. The ruins of the ancient sheep pen Grimsnesrettir is at the edge of the lava field south of the road where it ascends to the west. East of the lava field are grassy flatlands as well, Beitivellir, where travellers also rested en route to The Parliamentary Plains.

They are mentioned quite frequently in the Sagas.

WHAT TO SEE?
Nearby Laugarvatnsvellir Plains

WHAT TO DO?
Nearby Laugarvatnsvellir Plains

WHERE TO STAY?
Nearby Laugarvatnsvellir Plains