According to the continental drift theory, the Eurasian and North American tectonic plates shift and drift 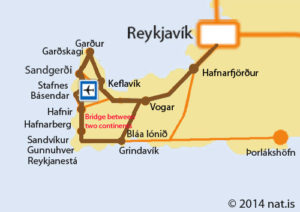 apart in an endless clash of awe-inspring forces under the gaping rifts and chasms at the tip of the Reykjanes peninsula in southwest Iceland and elsewhere in the drift zone or the Icelandic Graben. It actually is the continuation of the Mid Atlantic Ridge.

Over 1,000 years ago, the first Europeans to sail to America were Bjarni Herjolfsson, a native of Hafnir on the Reykjanes peninsula, and Leifur Eiriksson “The Lucky”. Their long and dangerous voyages were made in open longships.

The first white man who was born in north America was Thorfinnur karlsefni Snorrason. He moved to Skagafjordur in north Iceland.

According to legends from the late 15th century, a nobleman on board on vesel to Iceland (Ingjaldsholl) was no other than Christopher Columbus, who had undertaken this trip to study the journeys of Nordic seafarers to North America. He spent the whole winter to do so.

Today, however, you can follow in the footsteps of those early explorers by crossing the continental divide on Leif the Lucky’s Bridge, and take home your own personalised certificate as a confirmation and a lasting reminder of this unforgettable experience.

Close to Bridge Between two continent are Sandvik In the summer of 2005, Sandvik became the main location for filming Clints Eastwood’s film the “Flags of our father”.
Sandvik

Location: About 7km south of Hafnir by road 425

Bridge Between Two Continents in Icelandic

WHAT TO SEE?
Nearby Bridge Between Two Continents

WHAT TO DO?
Nearby Bridge Between Two Continents

WHERE TO STAY?
Nearby Bridge Between Two Continents

Links in Bridge Between Two Continents