Vague ancient sources mention hermits in Iceland before Christianity was adopted and cloisters were established. One of the stories tells us about 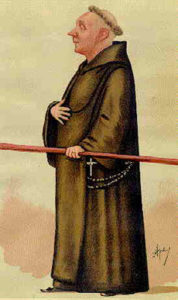 Asolfur Konalsson from Ireland. He did not want company with pagan people. Jorundur the Christian is also mentioned. Mani the Christian is supposed to have built a church at Kolgumyrar in the Hunavatn-county and served there 24 hours a day. Some female hermits are mentioned: Gudrun Osvifursdottir (she was young when Christianity was adopted; Laxdaela Saga), Hildur, who became a hermit at the Holar Cathedral during the time of bishop Jon Ogmundsson, Groa Gissurardottir (Gissur was the son of Isleifur Gissurarson, the country’s first bishop), who reclused herself when she grew old at Skalholt, Ketilbjörg lived in recluse at Skalholt during bishop’s Pall Jonsson (†1202), and Katrin reclused herself at Munkathvera before the convent at Reynisstadur, where she became the first abbess, was established.

Old sources imply that Hroflur (Rudolf) established a monestary at Baer in Borgarfjordur close to the year 1030. He was called back to England in 1049. There were more attempts at establishing cloisters during the early years of the church. Bishop Magnus Einarsson at Skalholt bought a part of the Westman Islands and attempted the establishment of a monestary there. He was lost in a fire in 1148 and nothing came off his ideas. Jon Loftsson at Oddi built a monestary at Keldur around the year 1190, where he wanted to spend his last years. It was probably abandoned after his death in 1197.

In the 12th century the church was well established and seven cloisters were founded. They were the offsprings of the great increase in number of cloisters in Europe at the time, and the fact, that many of the country’s church leaders had been educated there.

Little was documented about everyday life in the monestaries and convents. Therefore we have to rely on the archaeologists of the future to cast some light on that. We tend to connect the cloisters with culture and education, and last but not least, the preservation of the old Saga manuscripts. Cloister cartularies mention large libraries in some instances. The Thingeyrar monestary seems to have been the most important one, when it comes to literary production and the rewriting of the Saga literature. Stories of kings and bishops were written before and after the turn of the 12th century.

Historians are certain that the Saga of King Olafur Tryggvason was written in Latin in 1190. The monk Gunnlaugur Leifsson also wrote it a few years later and also bishop Jon Ogmundarsson’s biography. The 14th century canons were traced to the Benedictine school in North Iceland, where the Thingeyrar and Munkathvera monestaries educated their students. Abbot Bergur Sokkason at Munkathvera most probably wrote the canons of Michel and Nicolaus, and the so-called Laurentius Saga hints, that he was responsible for most of the 14th century canons. He became prior of the Munkathvera monestary in 1322 and abbot in 1325. Among other esteemed writers of the period were Arni Laurentiusson, and Arngrimur Brandsson, both monks at Thingeyrar. The prior of the Videy monestary, Styrmir the learned, was an esteemed writer as well.

The monestary at Helgafell in the West was an important centre for writing and education. The famous Skard’s book, preserved in two vellum manuscripts, most probably was written there. It comprises the stories of the apostles.

Preserved cloister cartularies are the best sources of their economy. Many business contracts have been preserved. Monestaries and convents also were important establishments for the elderly, who could afford to spend their last years in the care of the monks or the nuns. Widows were the most common customers, but also the odd married couple. Each instance required the permission of the bishop.

The reformation started in continental Europe in 1517, when Luther nailed his protests on the castle church door in Wittenberg. King Christian III started his rule in Denmark in 1536. One of his first decrees was the reformation of the church in his kingdom with himself as its highest authority. That way he managed to acquire the wealth and property of the catholic church.

Gissur Einarsson, Iceland’s first lutheran bishop, registered all the ordained people of the monestaries and convents of the Skalholt see. They did not turn out to be very many. King Christian’s church ruling arrived in Iceland in 1537. Bishop Gissur translated it to Icelandic in 1541 and was accepted by a convocation the same year. It offered monks and nuns to stay at the monestaries and convents for the rest of their lives, or financial support to seek other vocations.

The Thingeyrar monestary was founded by Jon Ogmundsson bishop of the northern see in 1112, but there are no records of monestary life there until 1133, when Vilmundur Thorolfsson was ordained its firs abbot. It was a Benedictine monestary up to the reformation.

The Munkathvera monestary was established by Bjorn Gislason, bishop at Holar in 1155. It was also dedicated to the holy Benedict and its first abbot was Hoskuldur, who is not recorded in any available sources. See Travel Guide Munkatvera

The Hitardalur monestary was established in 1166, probably to commemorate the big fire in Hitardalur in 1148, when bishop Magnus Einarsson of Skalholt and a large number of other people were killed. Farmer Thorleifur Thorlaksson at Hitardalur donated his property for the establishment of a monestary, but no records have been found about monestary lifel there. Only two abbots are vaguely mentioned, Hreinn Styrmisson (ordained in 1166; †1177), and Haflidi (†1201 according to annals). It was probably a Benedictine monestary. See Travel Guide Hitardalur

The Thykkvabaejar monestary was founded by Klaengur Thorsteinsson, bishop at Skalholt in 1168, and dedicated to the holy Augustus. Most of the monks of this order were ordained priests. They practised discipline and celibacy. Its first abbot was Thorlakur Thorhallsson, later bishop of Skalholt (the southern see) and canonized by pope Johannes Paul II on January 14th 1984 as the protecting saint of Iceland. He was educated by Eyjolfur Saemundarson (Saemundur the learned). Thorlakur was ordained as a priest very young. He also studied in Paris France and Lincoln England. He probably got acquainted with the Augustine order in France. He first became prior and then abbot. The monestary was famous for its religious rites and the celibacy of the brothers. Bishop Pall Jonsson of Skalholt allowed the people of Iceland to pledge in the name of Thorlakur in 1198, and the next year the parliament confirmed his sacredness. Thorlakur was elected bishop of Skalholt in 1174. See Travel Guide Thykkvabaejarklaustur

The Flatey monestary. Bishop Klaengur Thorsteinsson consecrated an Augustine monestary on the island Flatey on Bay Breidafjodur in 1172. For unknown reasons it was moved to Helgafell in 1184 or 1185. It probably served its purpose better on the mainland. Its firs abbot was Ogmundur Kalfsson and the monestary served until the reformation. See Travel Guide Flatey
Only two convents, both of the Benedictine order, were established during the middle ages in Iceland.

The convent at Kirkjubaer was established in 1186. Three years later a woman named Halldora was ordained its firs abbess. Its initiator most probably was Thorlakur Thorhallson, bishop of the southern see. This convent served until the reformation. See Travel Guide Kirkjubaejarklaustur.

The convent of Reynistadur was initiated by Jonrundur, bishop of the northern see, and Hallbera, who later became it s abbess (1295). Bishop Jorundur had donated a few estates for this purpose, and the convent was built at Stadur in Reynisnes. He convinced Hallbera and other wealthy women to donate handsomely to the convent. Jorundur and his successors remained the protectors of the convent, which served until the reformation.

The Modruvellir Augustine monestary was established by bishop Jorundur in 1296. Its first prior was Teitur, who is not documented any further.See travel Guide Morduvellir

The Augustine monestary on Island Videy probably was established at the initiative of Thorvaldur Gissurarson and Snorri Sturluson in 1225. Bishop Magnus at Skalholt was Thorvaldur’s brother. It was consecrated by him and he donated his income from the area between river Botnsa and the Hafnarfjordur bay to the monestary. Thorvaldur managed the monestary until he died in 1235. During the period 1344-1352 it was occupied by the Benedictine order. It served until the reformation.
See Travel Guide Videy

The Augustine monestary at Skrida was established in 1494 at the initiative of bishop Stefan of Skalholt. In the beginning it was managed by a prior, and its firs abbot’s name was Narfi. He was ordained in 1497. Vague sources mention, that the monestary never housed many brothers and only one monk lived there in 1198. According to archaeological excavations in 2006 contradicts these sources. The monestary served until the reformation. See Travel Guide Skriduklaustur

WHAT TO SEE?
Nearby MONESTARIES & CONVENTS CHURCHES AROUND ICELAND

WHAT TO DO?
Nearby MONESTARIES & CONVENTS CHURCHES AROUND ICELAND

WHERE TO STAY?
Nearby MONESTARIES & CONVENTS CHURCHES AROUND ICELAND