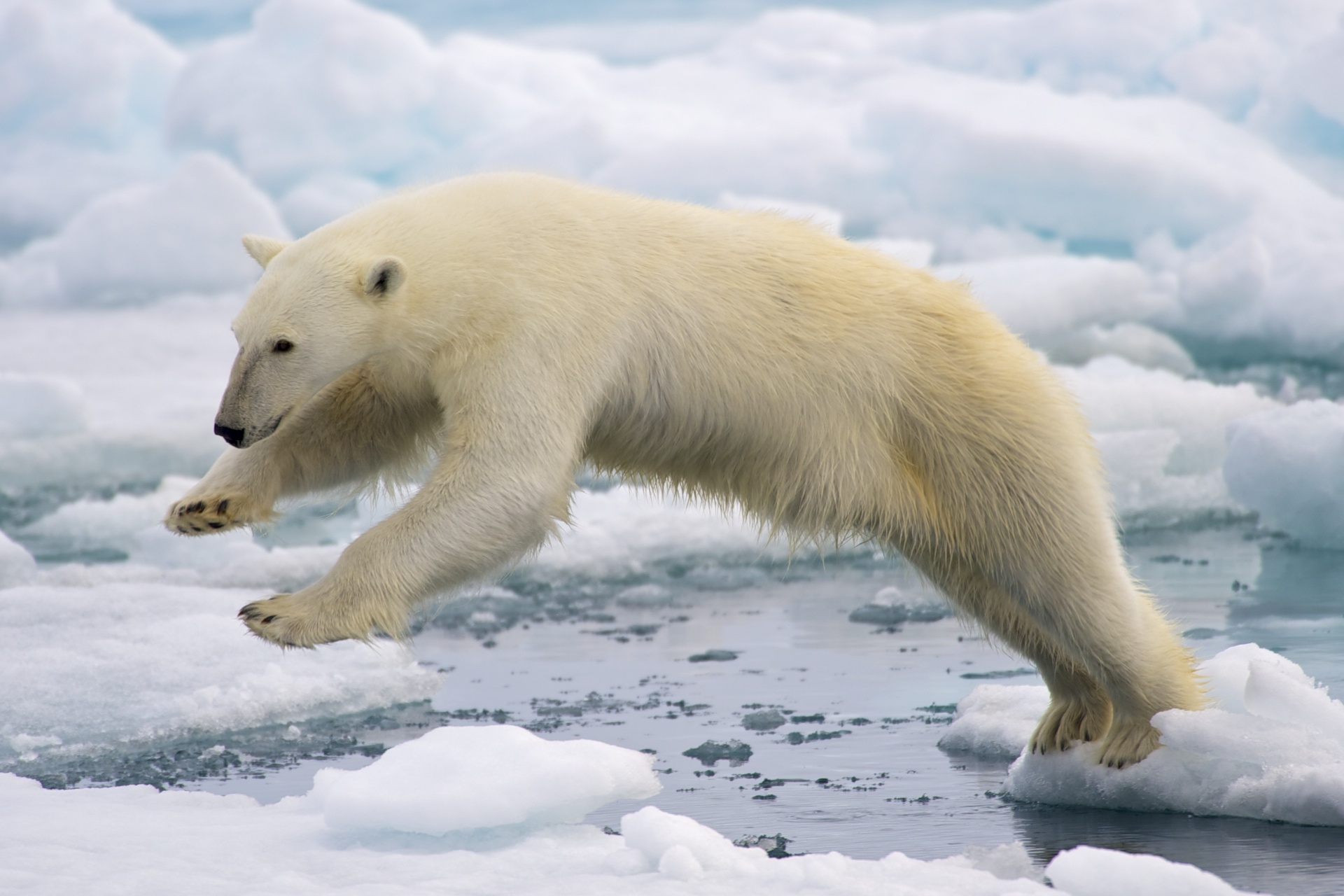 The polar bear (Ursus maritimus, formerly Thalarctos maritimus) is also called white-, water-, sea-, or ice bear. It is a semi-aquatic northern bear of the Ursidae family, which is found throughout the Arctic regions, generally on drifting oceanic ice floes. The polar bear was sought for its trophy value and the Inuits hunt it for its hide, tendons, fat, and flesh. Its liver is inedible and often poisonous because of its high vitamin A content. Since 1973 the polar bear has been protected by an international agreement that allows limited hunting only by local populations using traditional weapons.

The polar bear is well camouflaged against ice and snow by its whitish fur. It is a swift and wide-ranging traveller. It swims very well and is often found many miles from land or ice packs. It stalks and captures its primary prey, the seal and sometimes follows its southward migrations as far south as the Gulf of St. Lawrence in Canada and the mouth of the Amur River in Russia. It supplements its diet with fish, seaweed, grass, birds, caribou, and the occasional stranded whale.

The polar bear was rather a frequent visitor in Iceland during the increasingly cold periods of the late Middle Ages and into the 20th century, when the bays and fiords of the country were filled with pack ice for prolonged periods. All such animals, which caused havoc and casualties, were eventually killed. Some Icelandic museums possess stuffed polar bears and display them.

A male polar bear, which is usually larger than the female, weighs 410 to 720 kg (about 900 to 1,600 pounds). It grows to about 1.6 m (5.3 feet) at the shoulder and 2.2-2.5 m in length (also having a tail of 7-12 cm [3-4 inches]). The hairy soles of the polar bear’s broad feet protect and insulate it from the cold and also facilitate movement across the ice. An elongated neck supports its relatively small head. The polar bear is usually shy but dangerous when confronted or attacked.

One to four (usually two) cubs are born in winter, in a den of ice or snow, after a gestation period of 240-270 days. Cubs weigh about 1 kg at birth and remain with their mother for 10 months to 2 years.

At Cove Haelavik (Hornstrandir) In 1321 a polar bear attacked the inhabitants and killed 8 people. On May 2nd, 2011, at 9 O’clock a.m., the captain of a fishing boat reported the sighting of a polar bear at cove Haelavik, and that it had disappeared into the fog in the surrounding slopes.

In 2008, two Pola Bears appeared in North Iceland in June! (Skagi area). This species had not been spotted on dry land here since 1968.

In 2016, one Pola Bear appeared in North Iceland in July at Skagi area.

According to the legend, 12 polar bears once visited the farm Theistareykir in North Iceland and killed the people. The farmer’s son, who had been absent at the time, came back home only to find a few parts of his mother’s body. He chased the animals and killed them all. There is also some talk about a ghost, a brown, and monster like dog, which haunted the farm.

Polar Bears are wild animals looking for food, stay away from them.