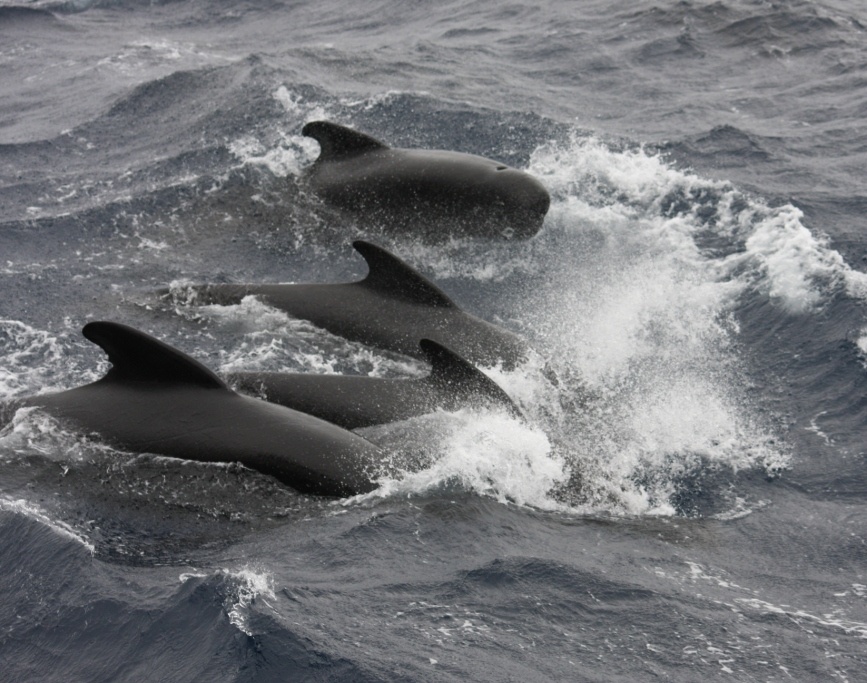 Males are 6-8 m long and weigh 4-5 tons, females 4-6 m, and 2-3 tons. The forehead is steep and convex and the colour black except the white stripe on the underside. The flippers are long and narrow, and 8-13 pairs of teeth in each jaw. Life expectancy is probably 30-60 years.

Pilot whales (Lat. Globicephala melas) are found in the North Atlantic and the southern seas. The North Atlantic species is a subspecies (G. m. melas), which spends the winter south of the 55°N and migrates to the shores of Iceland and Greenland and the Barent Sea in summer. They prefer the deep ocean but follow the squid to the coastal waters and are very sociable. About 20 of them search for food together and their groups are much larger when they migrate or mate.

They are polygamous. The females reach puberty at six, and the males at 12. Mating occurs in April-May, the gestation period is 16 months and the calf is suckled for 21-22 months. At birth, it is about 2 m long and weighs 70-80 kg. Pregnancy occurs every third year. The average diving time is about 4 minutes and the greatest diving depth is about 350 m. Pilot whales sleep so tight together, that their flippers touch.

Their main food source is the squid, but also fish, when squid is not accessible. In Icelandic waters, most of the pilot whales are found off the northwest and west coast. The world population is unknown, but the estimated number off the Icelandic coast is 100.000-200.000.