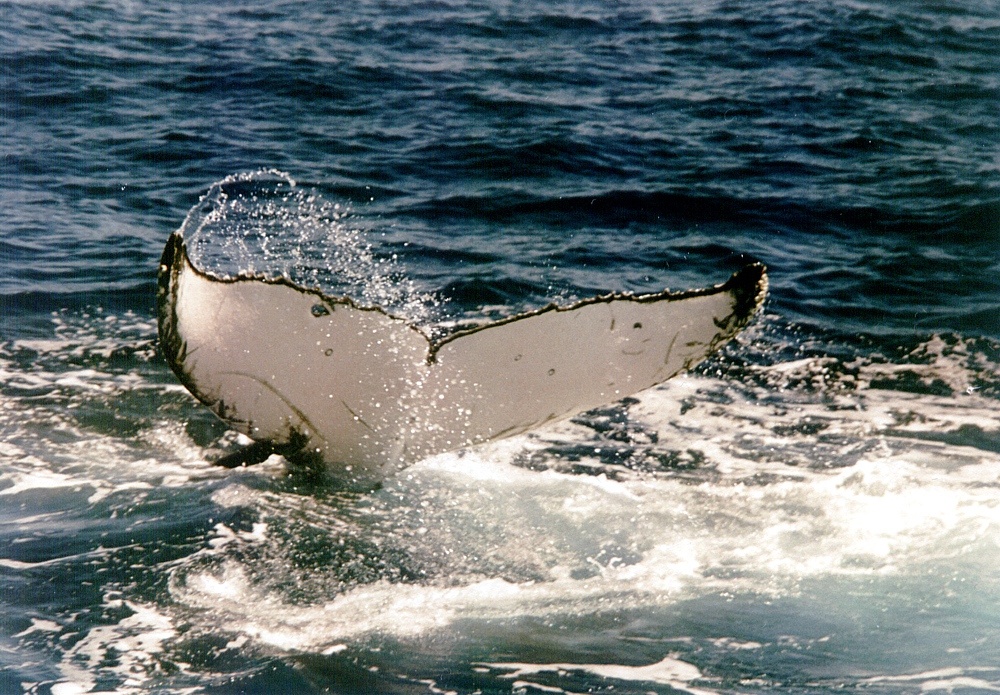 The hump back whale (Lat. Megaptera novaeangliae) in Icelandic waters is 12,5-13 m long. The females weigh 30-48 tons and the males 25-35. Its life expectancy is about 95 years. The flippers are very long, usually black, or black and white on top with a white underside, and their front edge is knobby. The back is black and the underside is light coloured. The colour pattern on the neck and the breast are variable. The baleens are dark grey. The white and black patterns on the underside of the flukes are used as fingerprints to recognize the individuals.

The humpback whale occurs in all of the world’s oceans. In the North Atlantic, the whales’ habitat reaches between Northwest Africa and the West Indies to the ice edge in the northern seas. Mating takes place during the migration in March-May, the gestation period is 11 months and pregnancy occurs every two years. The calf is 4½-5 m long at birth and is suckled for 5 months.

The mainstay of the food is krill, but also small fishes, such as capelin and herring. Humpbacks are often found in shoals of 2-20 animals and are rather slow swimmers. Their curiosity often draws them to passing vessels and sometimes they leap high out of the water. Each dive takes 15-20 minutes and sometimes a few animals round scattered schools of small fishes up by releasing air from below them and then ascend gaping to fill their mouths. They communicate or “sing” much during the mating period and are observed closed to shore than other large species.

Humpbacks were a rare species off the Icelandic coast after the overexploitation of the Norwegians and have been totally protected since 1955. Their main summer habitats were off the east- and southeast coast, but they were caught all around the country. Parts of the stocks remain in the northern seas during winter as well. Pregnant cows swim south to give birth and then return in summer. American harpoons have been found in humpbacks off the North Norwegian coast.

Humpbacks are among the most spotted species during whale watching tours all around the country.