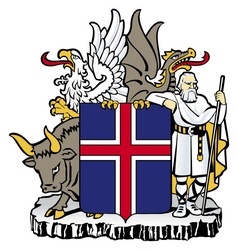 There are four shield-bearers:

The old guardian spirits of the land, mentioned in Heimskringla (Lives of the Kings) by Snorri Sturluson (1179-1241), i.e. a dragon, a large bird, a bull  (Griðungur) is the protector of northwestern Iceland and a giant  (Bergrisi) is the protector of southwestern Iceland. The shield rests on a slab of basaltic rock. The blue and the red colours are the same as in the national flag.

If a consul learns that the Icelandic coat of arms is misused, i.e.. used by unauthorized parties or used as part of a trade mark, signboard, etc., he shall notify an Icelandic embassy or the Ministry for Foreign Affairs in Reykjavik.

Rikardur Jonsson was the designer and wood carver, who made the first sample of the country’s code of arms.