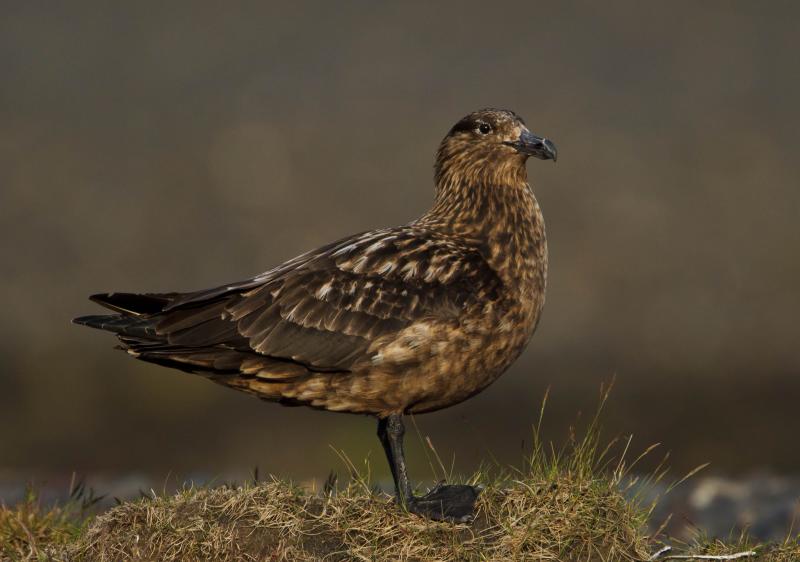 Picture Great Skuas
The extensive alluvial or outwash plains (sander) of the eastern south coast, such as the Breidamork and Skeidarar Plains, have the largest colonies of great skuas in the northern hemisphere, and it is estimated, that there are as many as 1500 pairs nesting on the former. Indeed, great skuas and also arctic skuas and great black-backed gulls can be found on all the larger sandy plains along the south coast.  The headland Ingolfshofdi has yet another bird cliff, and there ordinary guillemots far outnumber Brünnich’s guillemots.  The best place for vagrant species is certainly the Oraefi District, which lies between the Breidamork and Skeidarar Plains.

West of the vast outwash plains, in the Medalland District, are still some uncultivated, boggy areas where the extinct water rail used to breed.  Close the village Vik, several large colonies of puffins are found on grassy slopes.  In this district, the first lesser black-backed gulls were found nesting in 1929.  From there they spread westwards.

The headland Dyrholaey, the southernmost tip of the country, boast of bird cliffs and colonies of great black-backed-, lesser black-backed and herring gulls, some gannets on the rock stacks in the sea to its south, arctic terns and eiders.  In the cliffs one can expect to find puffins, Brünnich’s- and common guillemots, razorbills, fulmars and kittiwakes.

The Westman Islands offer much of interest.  Besides the myriads of cliff birds, this is the only place where manx shearwaters, Leach’s petrels and storm petrels breed in Iceland.  On four of those 20 islands, gannets nest in fairly large colonies.

The extensive lowlands of the south of Iceland have some interesting birds, although large areas are cultivated.  There black-tailed godwits are common and at migration time, white-fronted- and pink-footed geese abound mainly in the Landeyjar County.  Graylag geese are very common nesting birds all over the lowlands.  At the mouth of Rivers Thjorsa and Olfusa, on the south coast, there are good places for gulls and shore birds.

Birds of the South in Icelandic