This is the largest of four islands on the biggest bay of the Westfiords. It is about 2,2 km long and 0,8 km wide. It has been 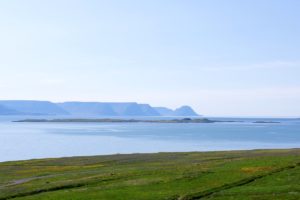 inhabited for centuries and still boasts of one farm. The island is well vegetated, does not rise high above water, lined with puffin burrows, tufted and boggy.

A part of the varied avifauna plays an important part in the survival of the inhabitants, such as the puffin catch and the eiderdown. The sheep are ferried to the mainland for the summer grazings not to disturb the precious eider ducks on their nests. A large and impressive wooden house from the late 19th century still decorates the island.

WHAT TO SEE?
Nearby Aedey Island

WHAT TO DO?
Nearby Aedey Island

WHERE TO STAY?
Nearby Aedey Island