dotted and decorated with ponds, bog and rocky mounds, which offer excellent view on fine days. The avifauna is lively and varied, the flora highly interesting and in places signs of higher sea levels are obvious The Borgarland area was mostly submerged for a period of time after the retreat of the Ice Age glaciation. This area is in the centre of the extinct Kroksfiord Central Volcano, which covers a large area. Its highest points are Mts Vadalfjoll (509 m), crater plugs brought to their present shape by the carving of the Ice Age glaciation.

In the lower lying areas rocky mounds and hillock, also crater plugs of ancient crater rows, appeared after thick layers of lava fields and sediments were carved down by the glaciers. Rock formations in this area are very varied and colourful. The farm Borg is at the foot of The Falcon Cliff (Falkahamar) and just west of it a layer of pillow lava strikes the eye. Those formations were most likely created during a submarine eruption. The greatest selection of plants is found on Lake Hafrafellsvatn, which attracts a large number of birds as well as the other ponds and bogs in the area.

At the utmost end of the peninsula is a rocky mound called Bjartmarssteinn. 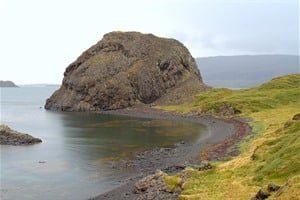 elves, or the hidden people, of a large

surrounding area. Clairvoyant people in the past and nowadays claim, that a much greater number of elves attends this trading post during the spring and autumn (fall) sales than humans in their towns and villages.
Picture: Borgarland .

WHAT TO SEE?
Nearby BORGARLAND

WHAT TO DO?
Nearby BORGARLAND

WHERE TO STAY?
Nearby BORGARLAND